The Ceiba Tree in Key West 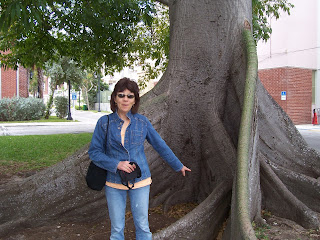 Sometimes rituals can create the circumstances conducive to synchronicity. When Hilary Hemingway was searching for an improvement of her family’s finances, she and her husband, writer Jeff Lindsay, went to Key West to perform a prosperity ritual involving a prominent ceiba tree near the county courthouse. The ceiba tree (or kapok) in Mayan cosmology was considered to be the tree of life that connects earth to sky, or man to the divine. They left notes with requests at the base of the tree, and poured rum around it, ‘feeding’ the muse. In a short time, Jeff’s novel, Dexter, sold to Hollywood and became the most popular television series on Showtime. Then Andy Garcia later took an interest in producing Hilary’s script on Ernest Hemingway’s final days in Cuba.

So, if it worked for Hilary and Jeff, why not us, Trish and I thought today. Since we’re spending a week on Sugarloaf Key, 17 miles north of Key West, we decided to visit that ceiba tree and prepared our own note. Since we’ve got a number of pending projects in various stages, we listed them all. We found the tree surrounded by several tourists, stood back and waited. Finally, Trish handed me the folded note and I walked around the huge tree until I noticed a little cubby hole near the base of the trunk on the south side. I slipped the note inside it, then covered it with leaves. Unfortunately, we lacked rum, but we promised the tree we’d be back with a shot or two before we left.

As we were about to leave, Trish turned to the tree and said, “Now we want some good news by tomorrow.” I thought that was asking a bit much, but didn’t say anything. We drove back to the house where we’re staying and a couple of hours later got a call from the owner, who is Trish’s literary agent. He had some news: an editor at New American Library (NAL) had just made a substantial offer on a pending proposal for an astrology book. Ka-Pow! Not 24 hours – two hours! We’re going back to the tree with some rum tomorrow.

This entry was posted in Uncategorized. Bookmark the permalink.