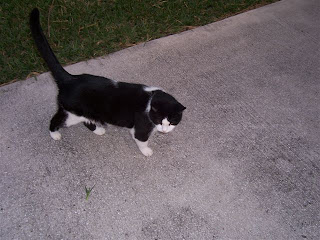 On November 22, we posted a story called Doolittle, that got some great comments. One of them came from Darren, who comments as Brizdaz. The cat in the story is a black and white cat; we didn’t have a picture of Sylvester, so we used this photo of our black and white cat, Whiskers, who died in 2006.
++

I had a black and white cat named Sylvester,who was killed on the road outside my house about fifteen years ago.He always liked to sleep on the road,so it wasn’t that much of a surprise that he would meet his fate that way. Here’s the strange part of the story though.The lady who hit him was rather distraught and had placed his body on the footpath,as we were out grocery shopping that evening,and weren’t home and since it was rather late when we came home,I decided to put his body in a box and bury him the next day. Next morning I got my shovel out and began to dig in my back yard,but the ground was so solid that I couldn’t dig anymore than about 6 inches before hitting rock,so I gathered up his body,put it in my car and headed for the forest a few miles from where I lived at the time. I was digging a pretty deep hole so wild animals wouldn’t dig him up and had the local radio station playing in my car,so I would have some music going while I dug the hole. When I completed the hole I placed him in the bottom of the hole and he looked like he was just sleeping,as the car had only run over his head,but not split it open,so it wasn’t a mess like a normal roadkill. Then I said “good-bye old buddy,you dumb cat” or something like that and started shoveling the dirt back over him. The radio started playing Peter Gabriel’s “Digging in the Dirt” and I was beside myself thinking of all the songs that could possibly come on the radio how appropriate was that one.Whenever I here that song I always think back to that day of digging in the dirt and saying farewell to my little pal. Here’s the clip here on YouTube.

This entry was posted in cats, pets, spirit contact. Bookmark the permalink.