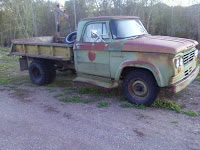 We don’t get too many synchronicities from truckers about trucks. So this one by Jim B.breaks the mold.

***
Back in cold February, I was chugging up Highway 75; when suddenly right before Ohio Gulch, the rig started behaving badly. Turns out it was the transmission, and even though a mechanic-friend had recently gone over it with a fine-toothed comb, it was shot.

That cost some big bucks; and then, only a few weeks later, the truck started misbehaving again, at that exact same spot. As locals know, Ohio Gulch is the turnoff for the dump transfer, and just north is where the State sometimes sets up weigh stations. It’s also essentially the last good place to pull over safely; if you’re heading north with a big rig in the area, and it breaks down.

The second breakdown was caused by a fuel pump problem. I thought it was strange and yet a little fortunate that the truck decided to break down at the same safe pullover spot twice. Then I remembered; fifteen years ago, I was driving a rig full of rocks for a stonemason, and that truck broke down at the same spot. I had loaded Gene’s truck to the brim, with four and ¼ tons of river rock. As we approached Ohio Gulch, his truck started thumping loudly from the right rear. I pulled over and soon saw that the wheel had actually rolled out from its base, while the lug nuts whizzed off like bullets in the wild-west sage. Although the tire and rim had shot off, it had miraculously wedged into a corner of the truck, keeping the masonry rocks from spilling out.

As I hitchhiked to the East Fork jobsite, passing over Greenhorn Bridge, I became thankful that the truck had not decided to shuck off its rock, back to the river there. I wasn’t looking for that type of legend on my resume.

It’s funny; every time I drive past that Hyndman Creek house with a friend and see those river rocks shining so intact, I feel compelled to pull over, point at the stones and tell this story.

And it makes me curious to hear about other people’s experiences of breaking down at same spots.

And while we did laugh later, Gene told me, when he saw me walking the last leg of Hyndman, two hours late and with no truck, he thought, “This can’t be good.”

This entry was posted in locations, road problems, travel, truckers. Bookmark the permalink.

13 Responses to A Trucker’s tale