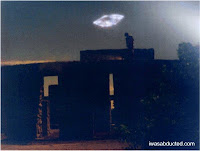 Some of you might remember a fascinating post, Jack the Ripper, by Australian therapist-futurist Marcus Anthony. The following post is one that many traditional psychologists certainly would hesitate telling anyone, much less posting on the Internet. But then the story is part of the reason the Marcus Anthony has moved beyond the status of traditional therapist. Enjoy!
***

Some people ask me how I got interested in knowledge that might be considered “alternative” in some circles. Here is a little story about an extraordinary experience that certainly helped me along my way! So here goes my story, and 100% true.

In 1996 I was living in Coffs Harbour, New South Wales, Australia, a small coastal town. One day I was walking along the street downtown, and I saw a sign which read: “Psychic readings, $10″. I had never had a psychic reading up till that time, and curiosity got the better of me. So I went inside and met a woman named Leslie who gave me a “reading.” The reading itself was nothing particularly special. But what followed certainly was.

To cut a long story short, I ended up going to one of Leslie’s talk/meditation evenings a few weeks later. At the end of the talk she told everyone present that she had had lots of dreams about UFOs the previous night.

“Whenever I have these dreams there are lots of UFO sightings around,” she said. “So if you go out tonight you may see something. I feel that about two in the morning would be the right time.”

When the alarm rang, I managed to drag myself out of bed. I stumbled around my house for 15 minutes, and then headed outside at 2.00 a.m. sharp.

My eyes almost popped out of my head when I swung the door open and looked up at the sky. For flying right in front of me in the clear night sky was something I had never seen before. I can only describe it as a large ball of luminous white light, about a third the size of a full moon. The thing was probably a few hundred metres in the air, and was floating eastwards at about 90 degrees above the horizon. There was absolutely no sound, and it seemed to be gliding on air. I can only describe it as eerily unearthly. I ran out onto the road, and watched it disappear over the neighbours’ houses. In total it was in view about 30 seconds.

Finally I gave up, and decided to head back to bed. I walked back down the short street to my home, and trudged up the driveway. Then, as I was about to duck under the doorway (I’m rather tall) I looked up one last time. Once again my eyes nearly jumped out of my head. I saw something equally as amazing as the ball of light. For, moving directly over my head there was a group of about twenty red, circular lights, flying in a double-V formation, one “V” inside the other. Again there was no sound, just eerie silence. The objects flew in a southerly direction, parallel the coast. They appeared to be a few hundred metres in the air, and within half a minute disappeared behind some trees at the end of the road.

I have had quite a few “interesting” experiences since that day, but probably nothing quite so extraordinary as that night. Of all the things that set me on a path of questioning dominant knowledge structures of western society, and the road to exploring human intelligence and human futures, this experience was probably the most significant.

What were those things I saw that night? How on earth did Leslie know that they were going to be there at that precise time, merely from a dream? Why are these kinds of phenomena still a taboo topic in modern science and academia? I’m still asking these questions today.

–Marcus Anthony has a new book coming out, Sage of Synchronicity.

This entry was posted in dreams, sightings, UFOs. Bookmark the permalink.